Yesterday, there was a wall of Tesla patents in the lobby of our Palo Alto headquarters. That is no longer the case. They have been removed, in the spirit of the open source movement, for the advancement of electric vehicle technology.

Tesla Motors was created to accelerate the advent of sustainable transport. If we clear a path to the creation of compelling electric vehicles, but then lay intellectual property landmines behind us to inhibit others, we are acting in a manner contrary to that goal. Tesla will not initiate patent lawsuits against anyone who, in good faith, wants to use our technology.

When I started out with my first company, Zip2, I thought patents were a good thing and worked hard to obtain them. And maybe they were good long ago, but too often these days they serve merely to stifle progress, entrench the positions of giant corporations and enrich those in the legal profession, rather than the actual inventors. After Zip2, when I realized that receiving a patent really just meant that you bought a lottery ticket to a lawsuit, I avoided them whenever possible.

Mr. Musk’s blog post doesn’t define “good faith” precisely, but he goes on to say that:

At Tesla, however, we felt compelled to create patents out of concern that the big car companies would copy our technology and then use their massive manufacturing, sales and marketing power to overwhelm Tesla. We couldn’t have been more wrong. The unfortunate reality is the opposite: electric car programs (or programs for any vehicle that doesn’t burn hydrocarbons) at the major manufacturers are small to non-existent, constituting an average of far less than 1% of their total vehicle sales.

At best, the large automakers are producing electric cars with limited range in limited volume. Some produce no zero emission cars at all.

Given that annual new vehicle production is approaching 100 million per year and the global fleet is approximately 2 billion cars, it is impossible for Tesla to build electric cars fast enough to address the carbon crisis. By the same token, it means the market is enormous. Our true competition is not the small trickle of non-Tesla electric cars being produced, but rather the enormous flood of gasoline cars pouring out of the world’s factories every day.

We believe that Tesla, other companies making electric cars, and the world would all benefit from a common, rapidly-evolving technology platform.

Technology leadership is not defined by patents, which history has repeatedly shown to be small protection indeed against a determined competitor, but rather by the ability of a company to attract and motivate the world’s most talented engineers. We believe that applying the open source philosophy to our patents will strengthen rather than diminish Tesla’s position in this regard.

Teslas are by no means the first Open Source Electric Vehicles (or OSEVs for short). Here in the UK Riversimple open sourced their hydrogen fuel cell powered vehicle many moons ago. Here’s what their conception looks like: 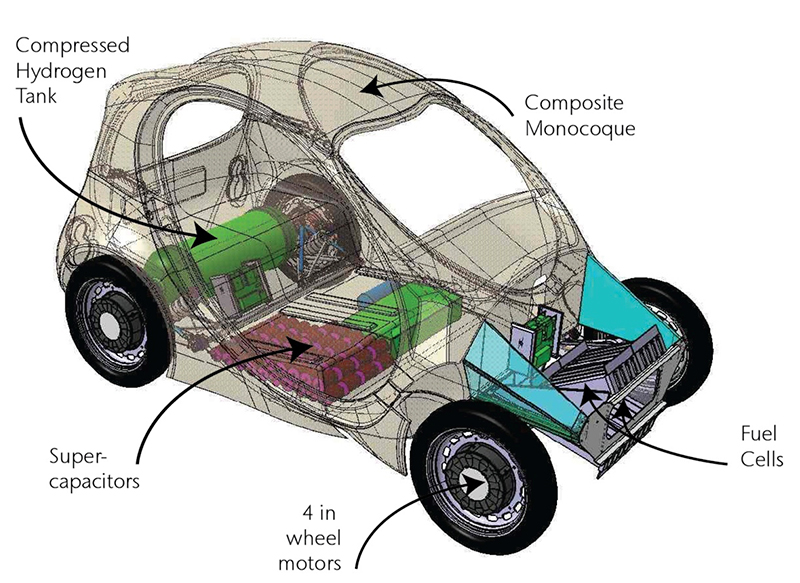 Tesla certainly isn’t that sort of OSEV company. Where are the CAD models for example? Nonetheless maybe a few enterprising entrepreneurs can now combine the best of both worlds and start making some real inroads into “the enormous flood of gasoline cars pouring out of the world’s factories every day”?

Here’s what the two vehicles look like in action, emphasising the differences between the two companies’ approach to the technology:

Please also note that the Tesla Model S is now available “with the steering wheel on the right side of the car”!