According to Bloomberg the answer to the question posed in our title is a most definite yes! In a February 19th article Tim Higgins says that:

Apple Inc., which has been working secretly on a car, is pushing its team to begin production of an electric vehicle as early as 2020, people with knowledge of the matter said.

The timeframe — automakers typically spend five to seven years developing a car — underscores the project’s aggressive goals and could set the stage for a battle for customers with Tesla Motors Inc. and General Motors Co., both of which are targeting a 2017 release of an electric vehicle that can go more than 200 miles on a single charge and cost less than $40,000.

According to Bloomberg, however:

Apple began around June an “aggressive campaign to poach” employees from A123 Systems LLC, the Waltham, Massachusetts-based battery maker said in a lawsuit against Apple filed this month.

Apple hired five people from A123 and has tried to hire battery experts from LG Chem Ltd, Samsung Electronics Co., Panasonic Corp., Toshiba Corp. and Johnson Controls Inc., according to the lawsuit.

That Apple was seeking to hire away his workers, offering $250,000 signing bonuses and 60 percent salary increases.

It seems as though when it comes to EVs, there’s never any smoke without fire?

This morning’s edition of The Economist includes an article on the Apple EV rumours:

APPLE’S ability to make desirable iGadgets designed for easy portability is beyond question. Reports emerged this week that it is planning to make a mobile device that will instead carry its users—an electric car. Apple’s plans are unclear and unconfirmed. By some accounts it has put a few hundred people to work developing cars to match Tesla, another Silicon Valley firm that makes fast and luxurious battery-powered saloons. Others reckon that it is working on a self-driving car.

Plenty of other tech firms are turning their attention to cars. In February Uber, a firm that provides taxis through a smartphone app, said it would set up a laboratory in Pittsburgh to develop self-driving taxis. Sony recently put money into ZMP, a self-driving car startup; Google has been working for years on driverless cars.

The Economist doesn’t sound optimistic about the future for the alleged Apple EV:

The likes of Apple may not know much about pistons and gearboxes, but the big challenge for electric cars is batteries. Battery-powered cars have many advantages: refuelling at home, cheap running costs and no tailpipe emissions. But the market for pure electric vehicles is tiny: 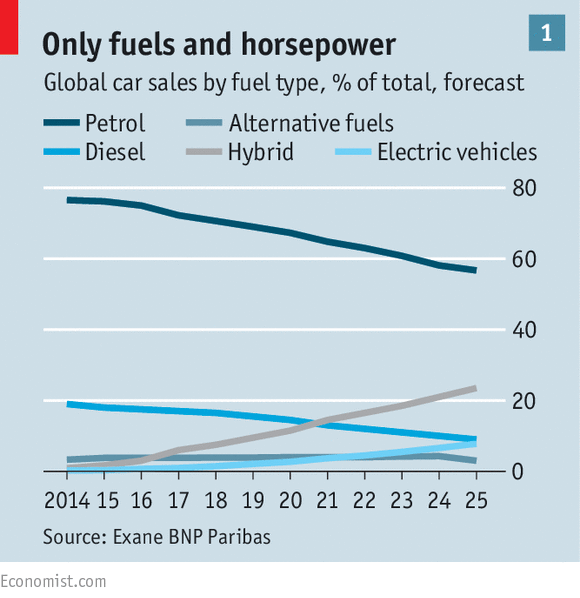 Expensive batteries make for costly cars, and limited range and a lack of recharging infrastructure have put off most drivers. Nissan’s Leaf, the world’s best-selling electric car, attracted only 40,000 buyers last year compared with the 250,000 the company once hoped to shift. Tesla aspires to enter the mass market but so far it has dealt with the battery problem by putting lots of them in a big, expensive car, thereby limiting it to a luxury niche. The plunging oil price dents the prospects for electrification still further.

Tech firms may be better off working with carmakers, to develop the software that will provide the brains of the self-driving car, and to improve the range and battery costs of the electric car. In the motor industry, supplying the key parts is generally more profitable than putting the cars together, even if you do not get your company’s badge on the bonnet. In the future cars will be different but the brands will probably be much the same.