The latest issue of the IEEE’s Spectrum magazine contains a most interesting article:

The introduction outlines the problem:

In the United States, 97 percent of utility-scale storage in 2014 was in pumped-storage hydroelectric plants, according to research by Oak Ridge National Laboratory, in Tennessee.

In traditional pumped hydro, a dam separates a lower reservoir from an upper reservoir. When a utility company needs to store energy, the system pumps water from the bottom to the top. It generates electricity when water flows back down through a turbine. In 2015, Citibank estimated that the cost of power from pumped hydroelectric was about 5 percent of the cost of grid-scale battery-stored electricity. The problem is that there are many places that consume high amounts of power but don’t have geological opportunities to build conventional pumped-storage plants.

Now here at V2G UK we’re obviously of the opinion that the Li-ion batteries of a future electrified transport fleet are going to provide a lot of distributed energy storage. Alternative forms of energy storage are going to be needed too though, and the lower the cost of such storage the better! The IEEE goes on to consider four novel storage technologies that utilise water. A commodity of which we have plentiful supplies in and around the South West peninsula!

In a variation of the concept of a tidal lagoon being proposed over the Bristol Channel in Swansea is DNV’s “Energy Island“. Instead of relying on tides to fill the lagoon,:

For now, this energy island is only in the concept stage. DNV GL, based in Norway, is running a business case analysis with partners in the Netherlands and discussing plans to build a large-scale system.

In DNV GL’s energy island concept, a dike encloses a 10- by 6-kilometer section of the North Sea off the Dutch coast. To store electricity, the system pumps interior water up and out to sea. Letting water flow through a turbine on its way back generates electricity. 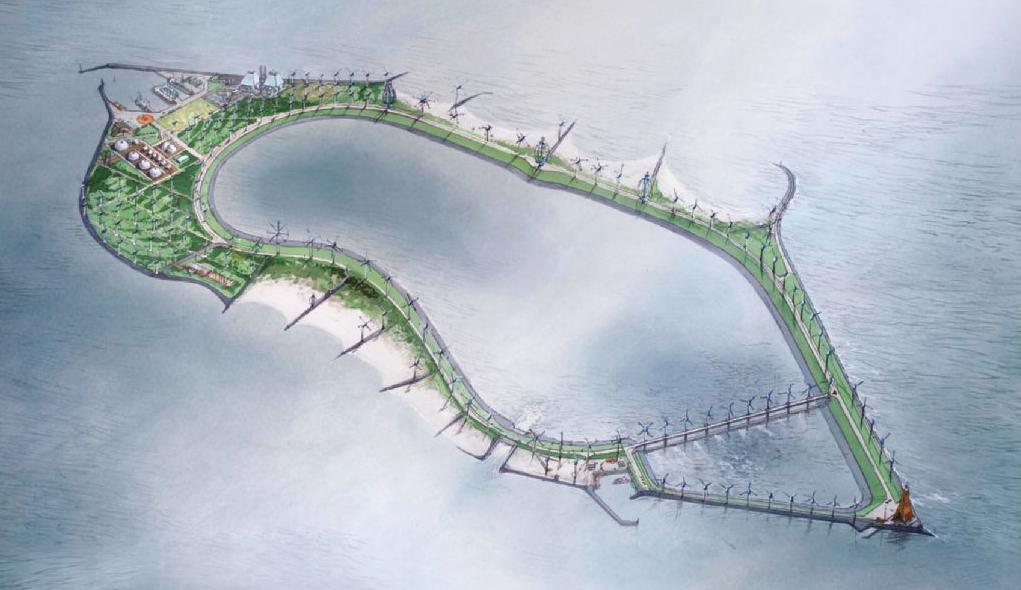 Unlike with traditional pumped storage, the inner lake can be built out in the sea as long as the seafloor has a sufficiently large layer of clay to prevent the ocean from seeping back in. There would also be some trade-off between more energy storage gained from a deeper ocean and increased construction cost.

Next an energy storage system that is undergoing trials – Stored Energy in the Sea (StEnSEA for short), which:

Is a hollow concrete sphere with a built-in pump turbine. It sits on the seafloor and, in its discharged state, is filled with water. To store energy, the system uses electricity to pump water out into the sea. When discharging, the pump works in reverse, generating electricity as water refills the sphere. 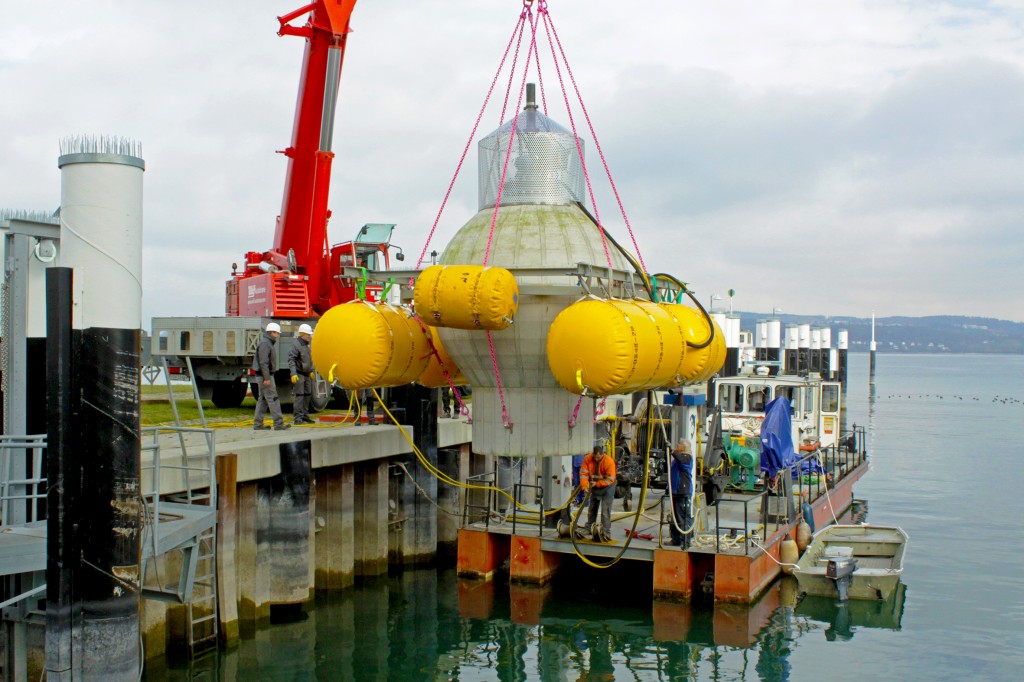 In November, Fraunhofer IWES installed a 3-meter-wide pilot sphere in southern Germany’s Lake Konstanz at a depth of around 100 meters. Following a year-long feasibility study, the team is now developing the concept for a 5-megawatt, 20-megawatt-hour full-scale system.

Next up is Canadian startup Hydrostor which aims to store compressed air in bags underwater:

Hydrostor’s system consists of weighted-down balloon like bags that are placed underwater and connected to a system on the shore. To store energy, it uses electricity to compress the air and fill the underwater bags. (A heat exchanger and underwater bath capture heat lost during compression to help preserve efficiency.) When electricity is needed, the air flows back out of the bag into a machine that expands it to drive a turbine. [See “Stashing Energy in Underwater Bags,” IEEE Spectrum, August 2014.]

Hydrostor commissioned a 660-kilowatt pilot plant with undisclosed storage capacity in November 2015 at Toronto Island, and the company is currently optimizing the performance. It could be followed by a 1-MW, 6-MWh storage system in Aruba later this year.

Finally there is the combination of a wind farm with built-in pumped hydro storage from Naturspeicher:

Wind turbines are built on the top of a hill with a pair of water storage reservoirs at their bases that raise them by an extra 40 meters above a typical turbine. A man-made lake sits at the bottom of the hill; energy is stored when the water is pumped up into the reservoirs, and electricity is produced when the water falls back down to the lake.

Naturspeicher plans to have a wind farm on line by the end of 2017 in the hills of the Swabian-Franconian Forest, in Germany, with pumped storage following by late 2018. It expects the system, when completed, to store 70 MWh and deliver up to 16 MW.

I wonder if any of these “low cost” energy storage systems will find their way over to South West England at some point in the not too distant future?