Yesterday the UK Met Office issued an amber warning for strong winds caused by Caroline, the third named storm of the winter in this part of the world:

Amber and yellow warnings have been issued for the hazardous winds expected on Thursday as #StormCaroline affects #Scotland and #NorthernIreland. Be prepared for some disruption pic.twitter.com/ulMWdPaR2s

With up to 90 mph gusts expected in the north of Scotland the Met Office pointed out that:

Flying debris is likely and could lead to injuries or danger to life. Some damage to buildings is possible, such as tiles blowing off roofs. Longer journey times and cancellations are likely, as road, rail, air and ferry services may be affected. There is a good chance that power cuts may also occur. Large waves are expected and beach material may be thrown onto coastal roads, sea fronts and properties.

Sticking with those power cuts for the moment, here are the lunchtime maps from the assorted Distribution Network Operators spread across the west and north of the British Isles: 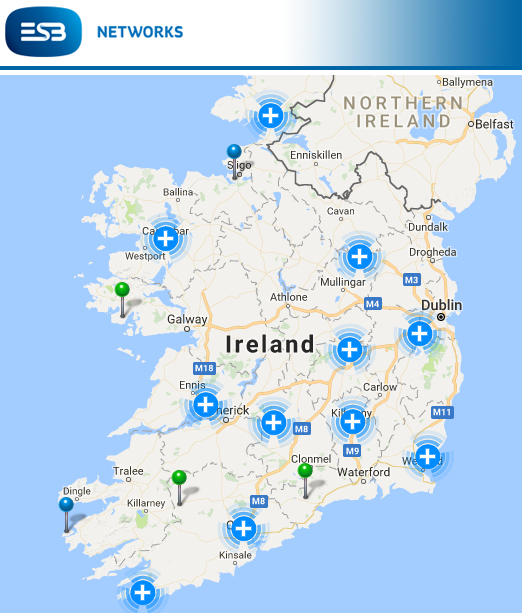 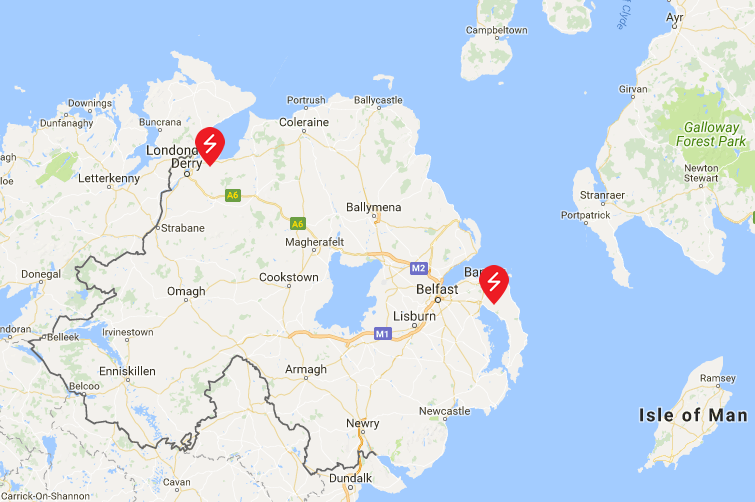 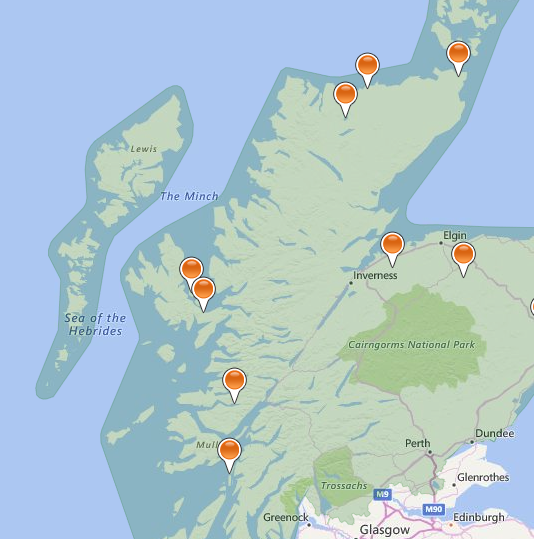 Scottish Power Energy Networks don’t provide an overview map of the area covered by their network, but they do issue severe weather updates from time to time. Today’s currently states that:

The MET Office has issued a yellow/amber warnings for Thursday 7th December 2017 to much of Scotland. Storm Caroline is expected to bring a spell of very windy weather reaching up to speeds of 80mph over the higher grounds.

Moving into Friday 8th and Saturday 9th, the yellow Met Office warning is still in place and it now covers Scotland, North Wales and Northwest Midlands. The yellow warning continues to bring strong winds but also frequent snow showers of 2-5cm, with 10-20cm in some places.

Icy surfaces are also likely to be an additional hazard, especially overnight. The heaviest and most frequent snow showers will progressively become confined to northeast Scotland during Saturday.

We have not yet seen any impact of Storm Caroline on our Network and as such we are presently working as business as usual, however, we will continue to monitor the weather situation closely.

Scottish and Southern do however provide timely news updates. The lunchtime edition reports that:

As forecast, gale-force winds reached the Western Isles from the early hours of this morning, with wind gusts in excess of 85mph recorded. SSEN’s network has stood up well to the initial impact and power has been safely restored to over 3,900 customers, mainly on the Western Isles and north-west Highlands, with around 780 homes currently without power as of 12pm today.

The full impact of Storm Caroline has not yet been felt across much of SSEN’s network region and it is expected there will be further faults throughout the day as the weather front continues to track across the north Highlands, into the Moray Firth and up to Orkney. Winds are expected to peak between midday and 6pm this evening with gusts of 70 -95mph forecast. Shetland is expected to feel the full force of Storm Caroline from midnight tonight through to lunchtime on Friday.

With snow and falling temperatures forecast for Friday, there is also a risk of line icing, where snow accumulates and freezes on the overhead electricity network, which can result in damage due to the sheer weight of accumulated snow and ice. Infrequent lightning also remains a risk. 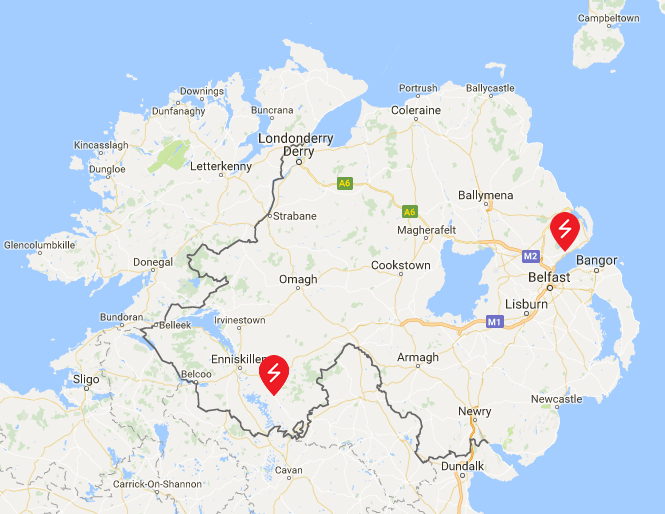 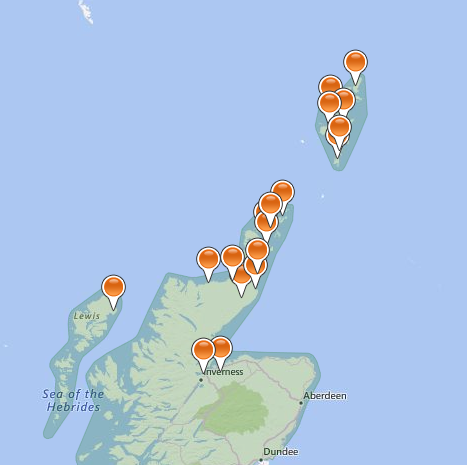 SSEN have issued a 4 PM update, which reads as follows: 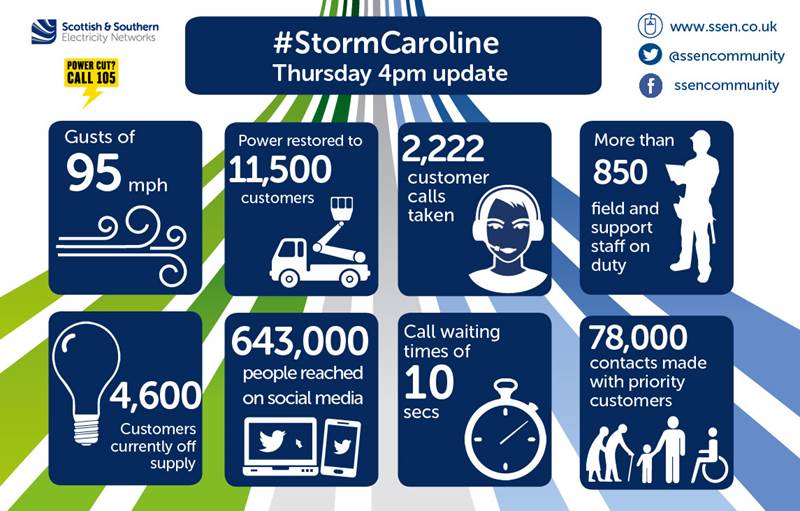 As forecast, gale-force winds have tracked slowly across SSEN’s network region, starting in the Western Isles in the early hours of the morning with the storm moving from west to east throughout the day. Wind gusts of 95mph have been recorded at Burgar Hill in Orkney, with widespread gusts in excess of 80mph observed across the north of Scotland.

SSEN’s network continues to stand up well to the impact of Storm Caroline and power has been safely restored to over 11,500 customers. The main areas affected have been the Western Isles, north-west Highlands, Caithness, Moray, north-east Aberdeenshire, Orkney and Shetland.

As of 4pm, around 4,600 homes remain without power, mainly in Caithness, Orkney and Shetland. All faults are resourced with teams working to restore power, where it is safe to do so.

Wind speeds are forecast to subside for most parts from around 6pm this evening, with the exception of Shetland which is expected to continue to feel the effects of Storm Caroline through to tomorrow morning.

With snow and falling temperatures forecast for Friday, SSEN will remain on Yellow Alert due to the risk of line icing, where snow accumulates and freezes on the overhead electricity network, which can result in damage due to the sheer weight of accumulated snow and ice. A risk of lightning also remains.

Whilst the far north of Scotland may be experiencing very strong winds, further south wind turbines across the nation will be spinning furiously, so lets now take a look at the mix of UK electricity generation at the moment, courtesy of Gridwatch:

We’re currently experiencing the usual early evening peak in demand and we’re also experiencing a bit of a cold snap at the moment:

With arctic air now in place across the UK, it's going to be a cold night with temperatures in rural areas falling below freezing – and it will feel bitter in the wind pic.twitter.com/6G8mugMigU

Hence there’s also an “amber warning” for electricity demand this evening, with wind contributing almost 9 GW of the required 47.17 GW. Here’s how that looks expressed as UK plc’s “Carbon intensity“: 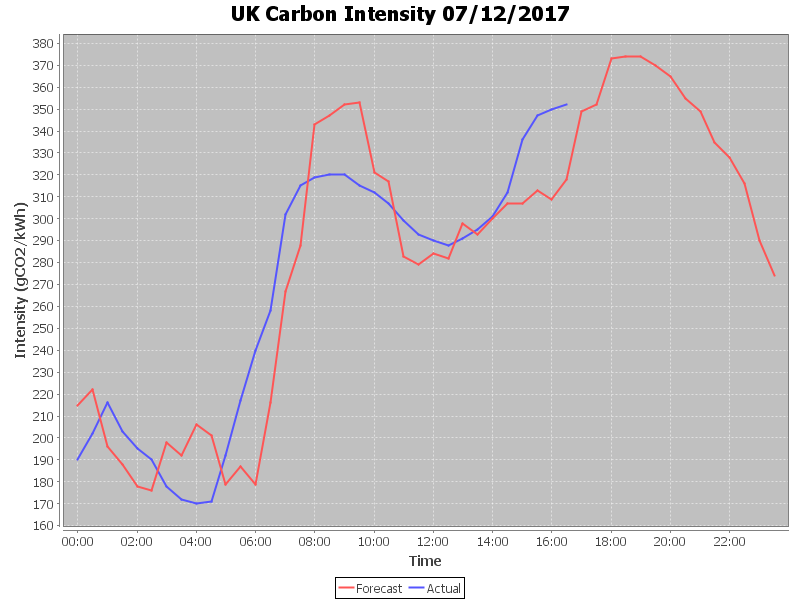 Our suite of power cut maps reveal that the worst effects of Storm Caroline are now confined to the far north east of Scotland, including Orkney and Shetland: Scottish and Southern have issued another updates: From the early hours of this morning, gale-force winds have battered the north of Scotland, tracking slowly across SSEN’s network region from west to east throughout the course of the day. Over the last few hours, Shetland has borne the brunt of Storm Caroline, with wind gusts of over 100mph recorded at Gremista.

Power has been safely restored to over 13,000 customers across SSEN’s network, the main areas affected being the Western Isles, north-west Highlands, Caithness, Moray, north-east Aberdeenshire, Orkney and Shetland. With wind speeds now starting to subside for most areas it is anticipated the vast majority of customers will be restored this evening. As of 7pm, there are currently 3,000 customers still off supply, 1,300 of which are in Shetland.

Due to the continued severity of the wind speeds experienced in Shetland, which are forecast to continue through to tomorrow morning, and access issues affecting a small number of customers on Orkney, it is likely that some homes will remain off supply overnight. SSEN’s teams remain on standby and will carry out repairs as soon as it is safe to do so.

As the evening has progressed UK electricity demand has dropped as forecast, and the generation mix now looks like this:

There’s still a wind warning in place for the Northern Isles:

.#StormCaroline has now moved away from the UK and is centred over Norway. For most areas, winds are much lighter, but warnings remain in force for the Northern Isles. Stay #weatheraware pic.twitter.com/BEO5F8kG7G

Consequently Scottish and Southern’s map of power cuts in the area still looks like this at the moment: Following the impact of Storm Caroline, which has seen prolonged gale force winds affecting many areas across the north of Scotland, SSEN has now successfully reconnected the vast majority of homes affected, with power safely restored to over 14,000 customers. The main areas affected have been the Western Isles, north-west Highlands, Caithness, Moray, north-east Aberdeenshire, Orkney and Shetland.

Due to the persistent and severe nature of wind speeds still being felt across parts of Caithness, Orkney and Shetland, coupled with difficulty gaining access to faults, as of 10pm this evening SSEN has taken the decision to stand down its field based teams in these locations for safety reasons and around 500 customers will remain off supply overnight. 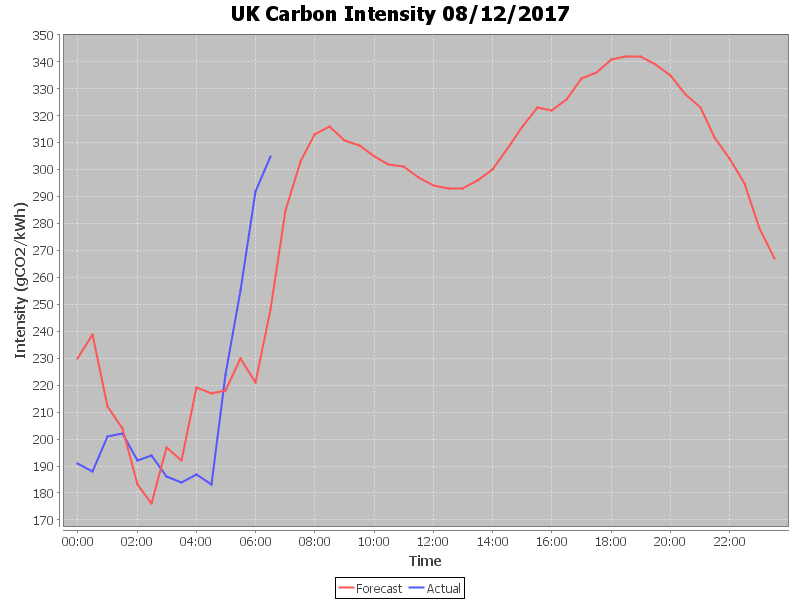 In their latest bulletin they say that:

SSEN’s teams continue to make good progress to restore power to the last remaining customers affected by the impact of Storm Caroline, which brought sustained gale force winds to many areas across the north of Scotland. Throughout the course of the event, SSEN has successfully reconnected power to over 18,000 homes. The main areas affected have been the Western Isles, north-west Highlands, Caithness, Moray, north-east Aberdeenshire, Orkney and Shetland.

As of 2.30pm, just 250 homes remain off supply, with the main areas still affected being Orkney and Shetland. All faults have been resourced and SSEN anticipates all homes will have power restored by this evening.

To support efforts to restore power to those homes who remained off supply overnight, SSEN has moved additional teams to the areas affected and is also working closely with its resilience partners to help overcome challenges with gaining access to faults as a result of cancellations to local ferry services and road closures due to snow. This includes working in coordination with the RNLI, who are providing a helicopter to get additional teams and resource to South Ronaldsay, Orkney.

Have now returned to business as usual but we will continue to monitor conditions and are well prepared to respond to whatever other challenges the Scottish weather has in store for us this winter. Much like yesterday, this evening’s demand is back up in the amber zone: