Major Hurricane Harvey reached category 4 before landfall on the coast of Texas last night. Apart from numerous other forms of damage a large number of properties will lose their supply of electric power over the next few hours and days. In advance of Harvey’s arrival The Electric Reliability Council of Texas (ERCOT for short) issued a press release, which read as follows:

AUSTIN, TX, Aug. 25, 2017 – The Electric Reliability Council of Texas (ERCOT) has issued a weather-related watch in preparation for Hurricane Harvey, which is expected to make landfall late Friday night or early Saturday morning.

ERCOT anticipates the hurricane may cause damage to infrastructure from high-speed wind, along with significant flooding in the South, South Central and Coastal weather zones in the ERCOT region. This includes the cities of Houston, Corpus Christi, Brownsville, Austin and San Antonio. These conditions may cause a number of power outages throughout the ERCOT region.

The ERCOT System Operations team is working 24/7 at ERCOT’s System Control Center, which is built to withstand hurricane-force winds, to monitor the situation and protect overall system reliability. Extra engineering staff will be supporting their efforts throughout the weekend.

ERCOT remains focused on maintaining system reliability throughout the entire ERCOT region. At this time, ERCOT anticipates it will have sufficient generation available during the hurricane, while storm-related damage is expected to result in widespread power outages.

Please visit www.ercot.com/help/harvey for updates throughout the weekend. This site includes Frequently Asked Questions as well as helpful contact information.

Researchers from Michigan, Ohio State and Texas A & M Universities have created a model to predict power outages (as they’re referred to in the United States) resulting from Harvey’s passage. Here’s their current forecast: 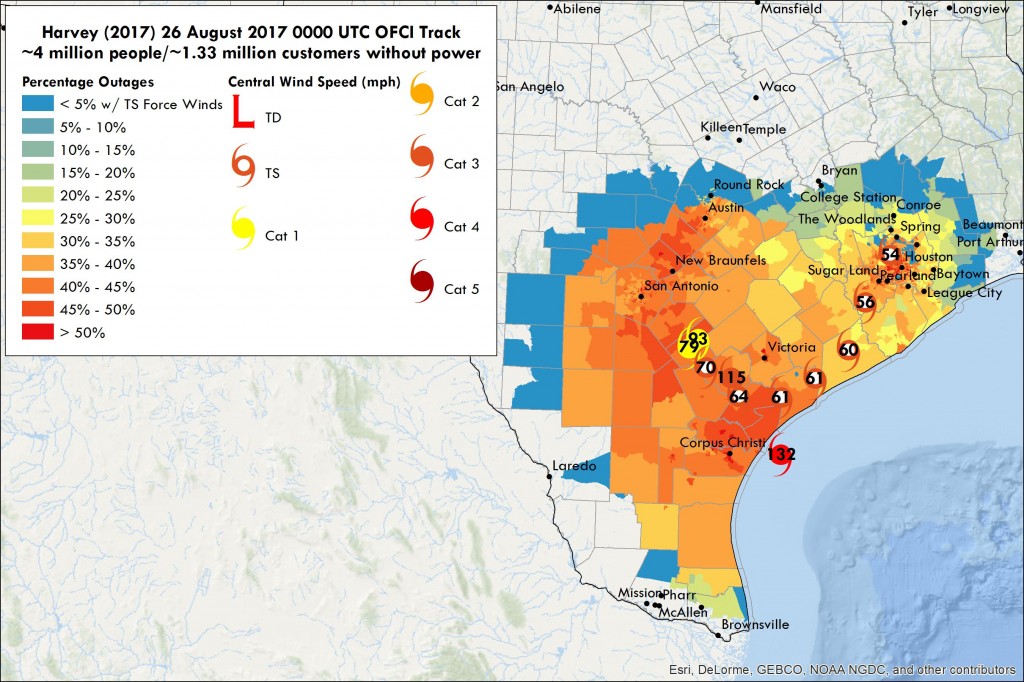 Currently over 200,000 properties in Texas are without electric power as a result of Harvey. That number will increase! Here’s some example outage maps at the moment (09:00 UTC): 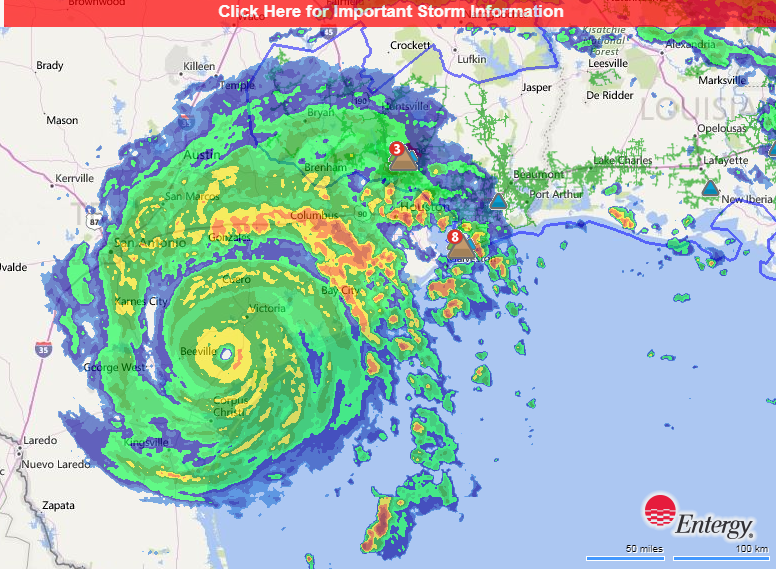 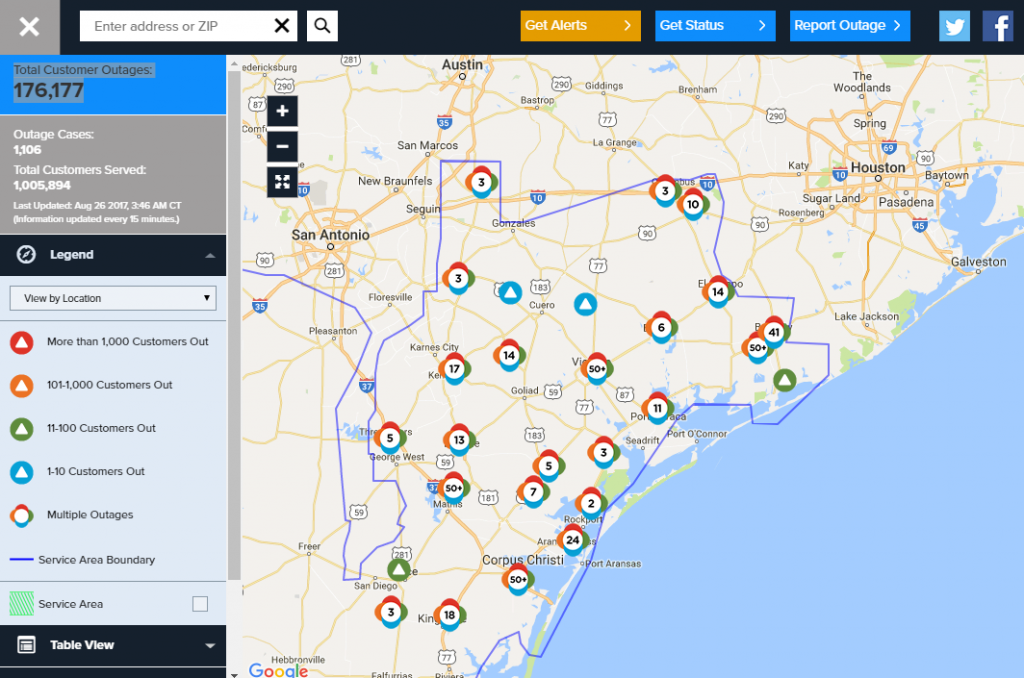 How smart is @ERCOT_ISO's #SmartGrid? ~250,000 properties in #Texas now have a power #outage from Hurricane #Harvey: https://t.co/asFGiLsr1U pic.twitter.com/amxhem1gPZ

Customer outages have increased to more than 300,000 in the ERCOT region. #HurricaneHarvey

Power outages across Texas dropped below a quarter of a million overnight, but have now risen again to over 260,000. There has been a large increase in the region powered by CenterPoint Energy: 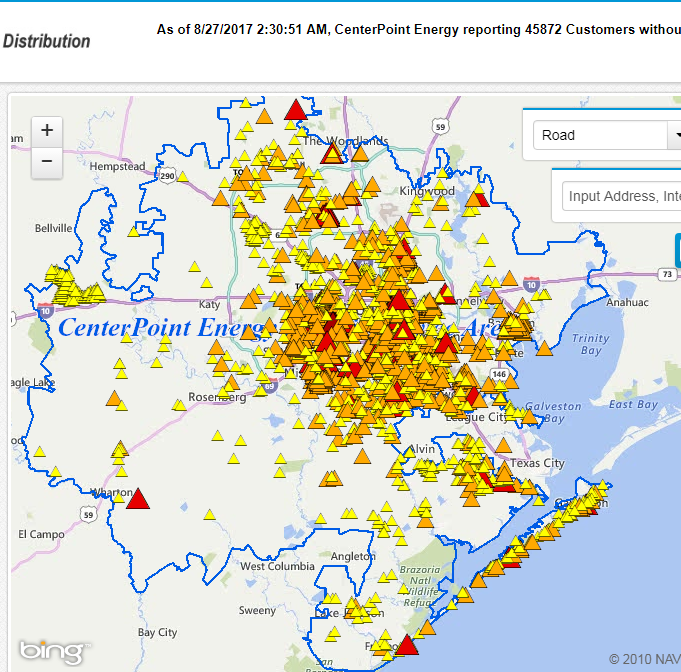 A problem that we’re all too familiar with here in South West England is that power outages can lead to communications outages. The United states’ Federal Communications Commission has issued a report on the effects of Hurricane Harvey on the cellphone infrastructure in Texas: 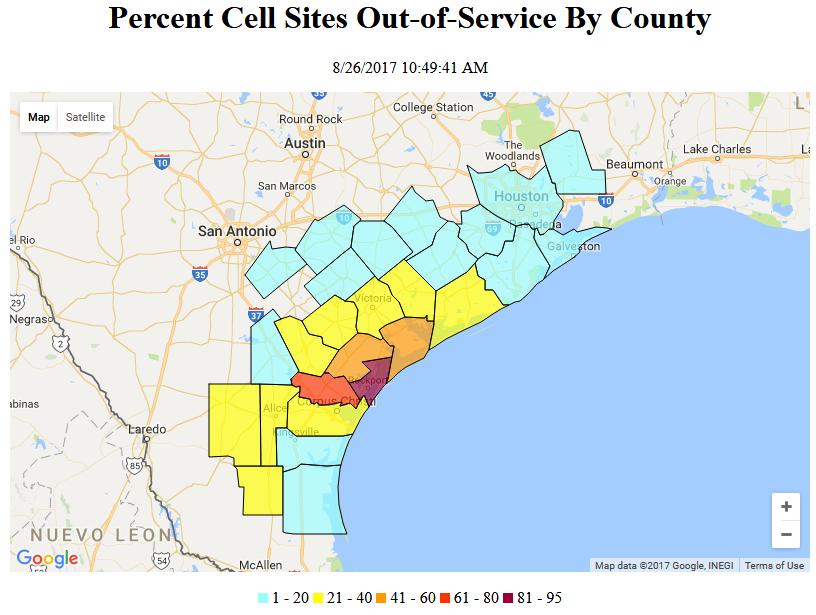 There are 4% of the cell sites down in the affected area. The counties with greater than 50% of cell sites out are Aransas, Refugio, and San Patricio in TX. There are no cell sites affected in LA.

The FCC also reports that:

The Public Safety and Homeland Security Bureau (PSHSB) learns the status of each Public Safety Answering Point (PSAP) through the filings of 911 Service Providers in the Disaster Information Reporting System (DIRS), through reporting done to the FCC’s Public Safety Support Center (PSSC), coordination with state 911 Administrators and, if necessary, individual PSAPs. There are a total of 9 PSAPs affected:

There are currently still over 300,000 power outages across Texas. This rainfall radar map shows that the Houston area is still enduring very high rates of precipitation: The number of reported outages has dropped overnight (UTC), but there are still over 250,000 “customers” without electric power in Texas, plus some more in Louisiana. Here’s the current Entergy Texas outage map as Harvey heads back towards the Gulf of Mexico: There are a total of 17 (up from 9 yesterday) PSAPs affected: 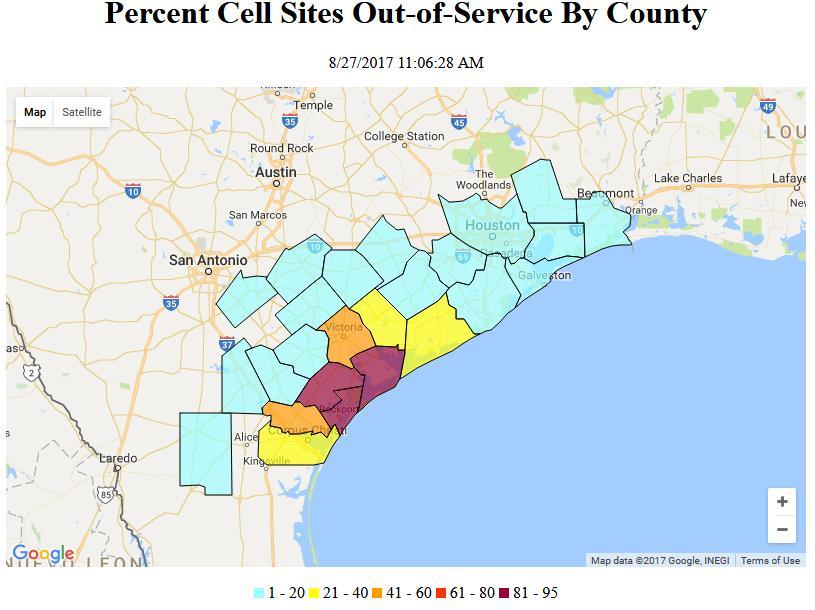 There are 4.1% of the cell sites down in the affected area. The counties with greater than 50% of cell sites out are Aransas, Calhoun, Refugio, and San Patricio in TX. There are no cell sites affected in LA.

Reported outages are heading for 300,000 again whilst Texas wakes up to further flooding as Harvey heads back to the coast: Reported outages have dropped somewhat overnight, as the centre of Tropical Storm Harvey is now over the Gulf of Mexico once again: The ERCOT grid continues to be in stable condition following Hurricane Harvey. However, several transmission lines remain out of service, especially near Corpus Christi and Victoria where Hurricane Harvey made landfall.

Two major 345-kV transmission lines serving the Gulf Coast area are still out of service, along with many other high-voltage transmission lines. As of mid-day today, a little more than 6,700 MW of generation capacity, including a very small percentage of renewables, was off-line for reasons related to the storm.

Electricity demand in the days since landfall has been about 20,000 megawatts (MW) below typical August electricity use, peaking at less than 44,000 MW, due to a combination of structural damage along the coast and cooler temperatures in much of the region. 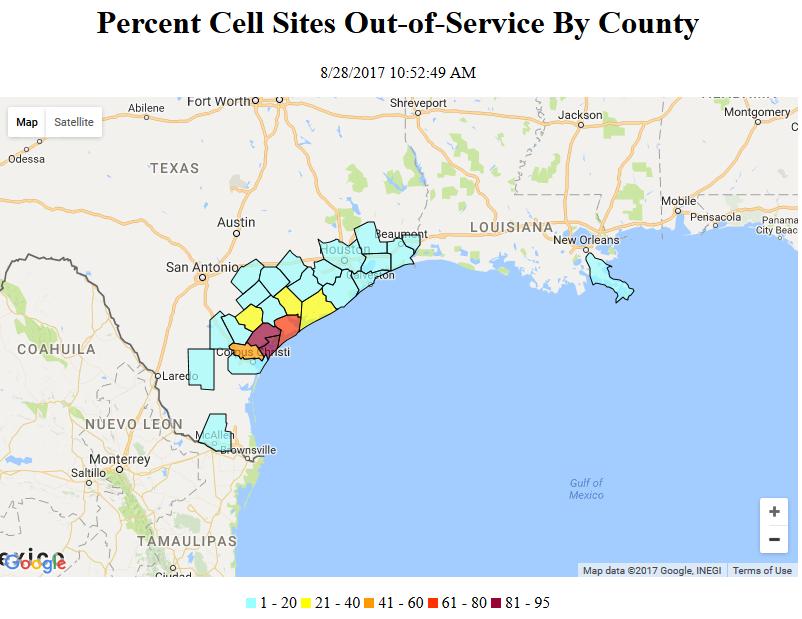 There are 4.7% of the cell sites down in the affected area, up from 4.1% yesterday. The counties with greater than 50% of cell sites out are Aransas, Calhoun, and Refugio in TX. Plaquemines is the only county in LA reporting any cell sites out.

As a new day dawns in Texas reported outages are increasing once again. Over 270,000 in Texas plus ~5,000 so far in Lousiana: The latest forecast from the United States’ National Hurricane Center shows that at long last Harvey will move inland and dissipate: Rainfall radar reveals that the rain has stopped falling over Houston: 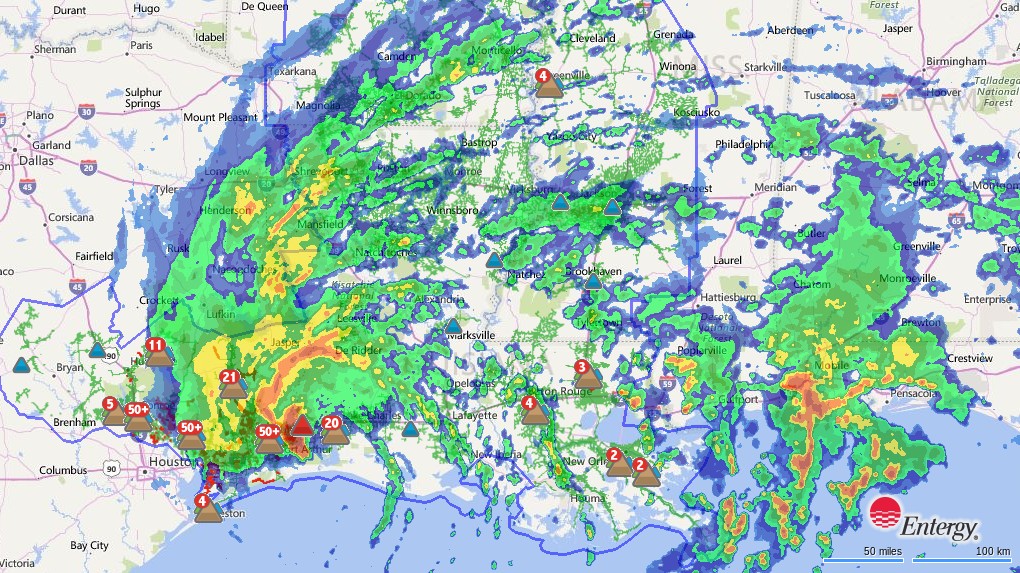 The power outages continue however. There’s still over a quarter of a million properties without power in Texas, with a few thousand more in both Louisiana and Mississippi. Whilst we wait to see when the number of outages starts to reduce significantly, here’s a rainfall radar animation of Harvey’s progress so far:

NEXRAD movie of #HurricaneHarvey, put together by my colleague Ken Bowman. pic.twitter.com/EzHTYEdUvU 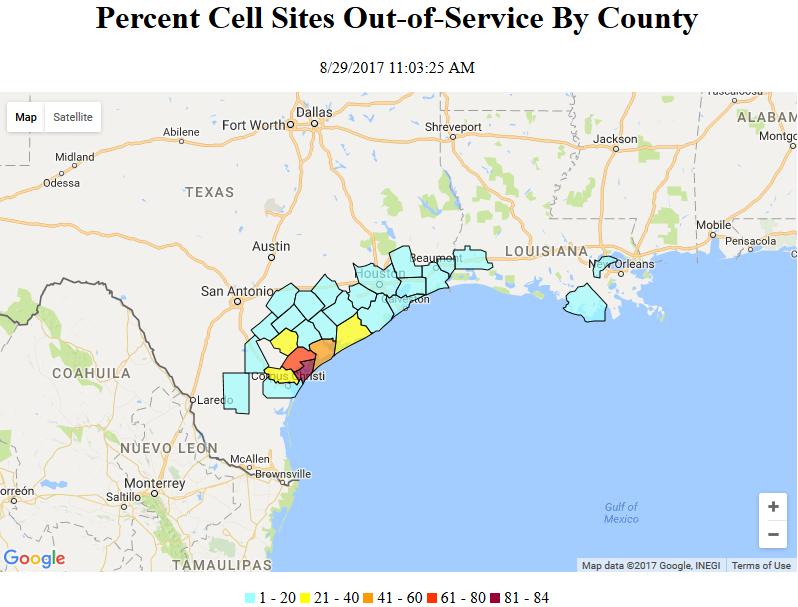 There are 4.7% of the cell sites down in the affected area, the same as yesterday. The counties with greater than 50% of cell sites out are Aransas and Refugio in Texas. In Louisiana, Calcasieu, St. John the Baptist, and Terrebonne are the only parishes to report any cell site outages, with each having only one cell site out.

Power outages due to ex Hurricane Harvey are back up over 300,000: 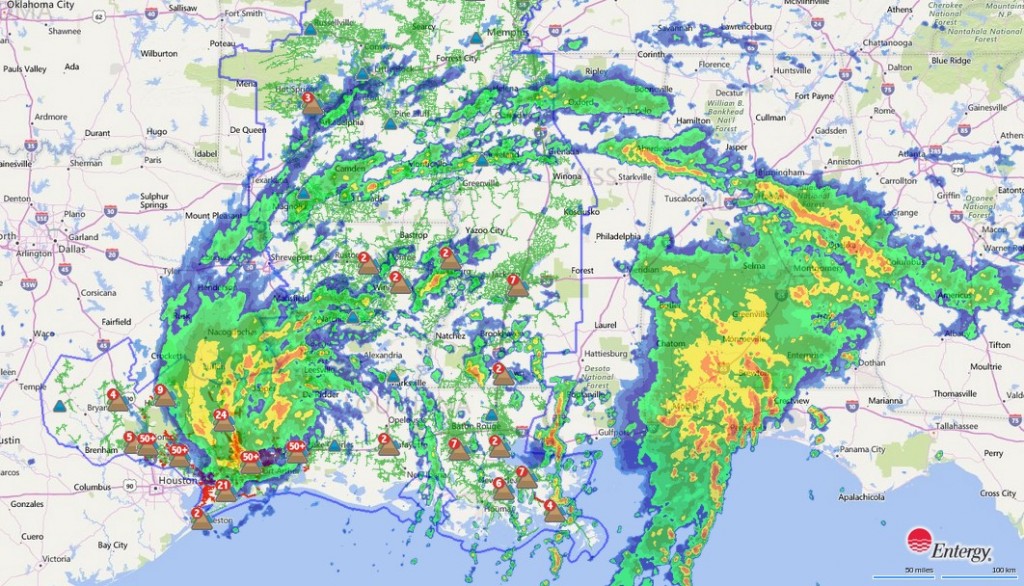